Carbon farming is a concept where cultivation of the soil takes place with a focus on optimizing the storage of CO2 in the soil. Traditionally, plow-free cultivation is one of the tools most commonly used in agriculture to store CO2 in the soil. It is well known that when you don’t plow, CO2 emissions from the soil can be reduced by more than 1.5 tons of CO2 / hectare. However, this is far from the only effective tool. Uncultivated grass areas, such as MVJ soils, can, according to climate calculations, bind 2.0 tons of CO2 / hectare through the "root network".

Shouldn't we then just take out even more lowland soil for MVJ and make uncultivated grassland? Let them graze and then we are in goal….

In theory it sounds really good, BUT! No rose without a thorn. The amount of CO2 storage in the soil depends on the growth of biomass (grass and herbs). In no time, the production of biomass will decrease significantly, which will mean that grazing “is no longer feasible", as there will only be enough feed for very few extensive cattle breeds in very few numbers. It will no longer be profitable for agriculture to graze the areas, which means that grazing mainly becomes a government expense, if the state maintains that river valleys, which are today cultivated agricultural areas, should remain light-open river valleys.

So what? International studies show that well-cultivated grassland can bind a minimum of 5-7 tons of CO2. This mode of operation supplies significant amounts of nutrients to the grasslands, typically in the form of manure (for conventional farms also fertilizers). In this way there will be a significant risk of leaching, and through the decomposition of fungi / bacteria in the soil, there will be a not insignificant emission of nitrous oxide and methane, which are far more potent greenhouse gases.

It's not really rocket science!! We need to find the balanced middle course. We only supply "small amounts of nutrients" (e.g. 50KgN / Ha compared to today, ecology 140kg N and conventional up to 240kg N). The small amount of nitrogen is enough to ensure the biomass growth, and grazing / haymaking provides an attractive yield.

So is that the way we should go? Both yes and no, knowledge, awareness and development have not stood still - and fertilization can be significantly optimized through composting.

Fertilization does not have to be just manure / fertilizers. Permeco works on composting the dry matter of the "turd". It's not just simple garden compost. To avoid the development of nitrous oxide, composting must take place under conditions rich in oxygen, so aeration and stirring are important. Likewise, with normal "pile composting" ammonia etc. will begin to form, so in fact we have just moved the problems from the field to a compost pile. In a spreadsheet, it looks nice, but seen as a whole, it is not much better.

We solve this through a "composting reactor". In short, it is a large container where aeration and "stirring" are ensured. The gases released during the composting process are passed through a bio filter (we work in a closed system, so now we can control the emission), where over 90% of the emission is collected, bound in water, and can be used for the fields instead of being released into the atmosphere.

By fertilizing/cultivating the fields in this way, it will be possible to add 1-2 tons carbon/ha through the compost (depending on nutrient content) (carbon content 25-35% in the compost). Every ton of carbon we bind in the soil corresponds to 3.6 tons CO2 !! That means that a total for the Permeco model's "Carbon farming" is realistically doing 10 tons CO2 /ha. This does not include the reduced laughing gas and methane emissions from the manure part. It is also not included that the "reactor compost" will have a very high content of dry matter (70-80% VERY DRY), so that the amount to be spread is reduced by a factor of 7-10 compared to slurry (much lighter machinery with significantly less driving).

An additional side effect is that the compost does not smell and that the nutrients are released at such a slow pace that leaching is theoretical.

To support biomass production, we also sow herbs and nitrogen-fixing plants so that nature itself can find the right balance again. 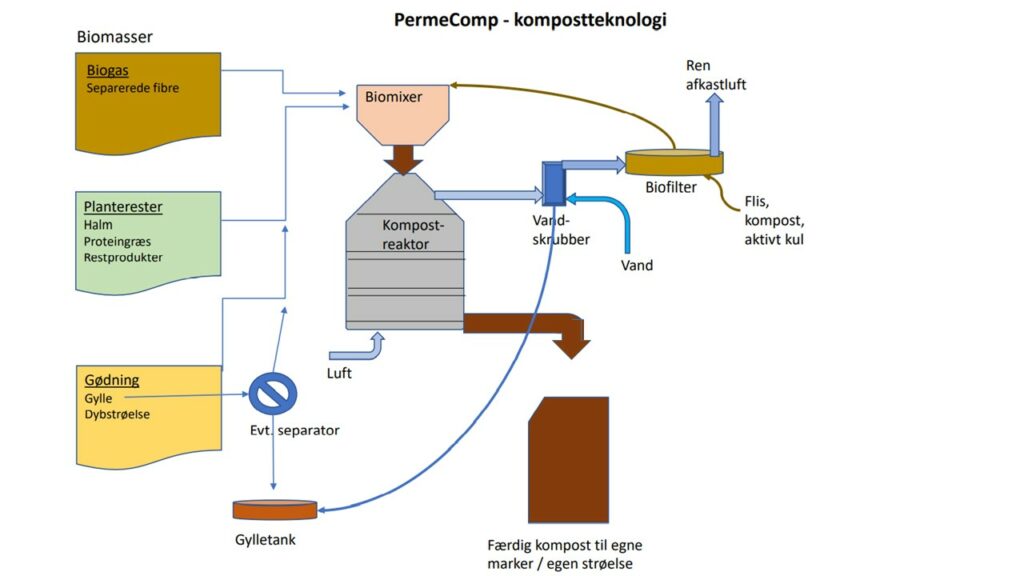